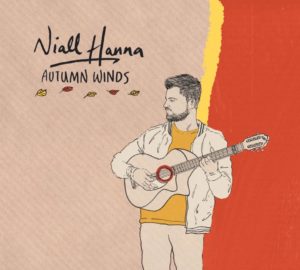 Releasing his debut album of songs, Niall Hanna brings a new life to traditional songs in a unique style. After winning the Young Musician’s Platform Award from Arts Council NI in 2016, he has utilised this springboard to deliver a beautiful album of traditional songs from Ulster, combined with two of his own newly composed songs including the title track ‘The Autumn Winds’. Sensitively produced by Dónal O’Connor in RedBox Studios Belfast, the album incorporates modern musical arrangements around this collection of traditional songs which Niall delivers with cnviction in his own unique style. A grandson of the great traditional singer Geordie Hanna, the ‘Lough-shore’ style of singing is strongly represented on the album in a contemporary way. Niall’s own composition ‘Sweet Lough Neagh’ gives a clear reference to this, where he praises the tranquillity of his native Derrytresk, and the surrounding area in County Tyrone.

This album also breathes a new life in to some of the famous old ballads of Ulster. Lough Erne Shore is a perfect representation of the album sound where it employs a more modern arrangement to a beautiful old melody. The Stately Woods of Truagh and Banks of Bann also both feature in this way to present Niall’s consistently strong interpretation of Ulster Song.

Niall has produced an exciting debut album this year which is already getting great attention and quickly building a fan base for this young artist.

“Drawing from his rich family singing legacy, this album is a gem…Niall Hanna’s star is on the rise and he is one to watch in 2018 ” Lynette Fay – BBC Radio Ulster

“…a beautiful voice, one with softness yet fullness of tone which renders his performances of old Ulster songs very special.” Jane Cassidy