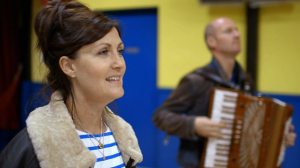 We worked with award winning director Duncan McDonald and Voice over artist Brian Mullen on reversioning this BBC Alba Scots Gadhlig documentary into Irish for TG4.

It’s easy to forget that not so long ago, Scotland’s traditional music landscape was in a perilous state. The 1970s were a period of uncertainty, few children were choosing to play instruments, folk clubs were a small niche affair, and it simply wasn’t ‘cool’ to play traditional music.

However, it was against this backdrop, that a group of Oban High School pupils decided to combine their musical talents and form a folk band! Fast-forward through the intervening 30 years and that young school band, Capercaille, have achieved a position on the global music stage that, at their time of forming, would have been unthinkable.